Aranda is a film about the curious human being’s thirst for knowledge. The protagonist is a ship, the marine research vessel Aranda, which sails back and forth on a shoreless ocean, never reaching port.

The vessel Aranda is a microcosm, an organism, a machine, a heroic voyager. The sea is the Baltic, the most polluted sea in the world, and the South Atlantic, right next to Antarctica.

The three elements in the film are the ship, the sea and man, the largest of these being the sea. The sea follows a different time frame than humans. It takes about 1,200 years for a sea current to travel from the north Atlantic to Antarctica and back – a human lifetime is not long enough to register the direction taken by great changes occurring in the sea. But a curious person explores and is aware of the finiteness of his time; he remembers and anticipates. 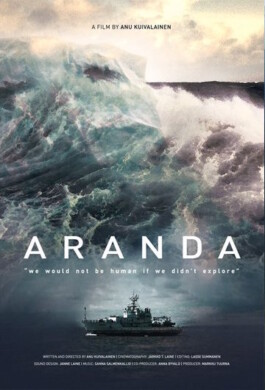